Clark Kent instead of Superman 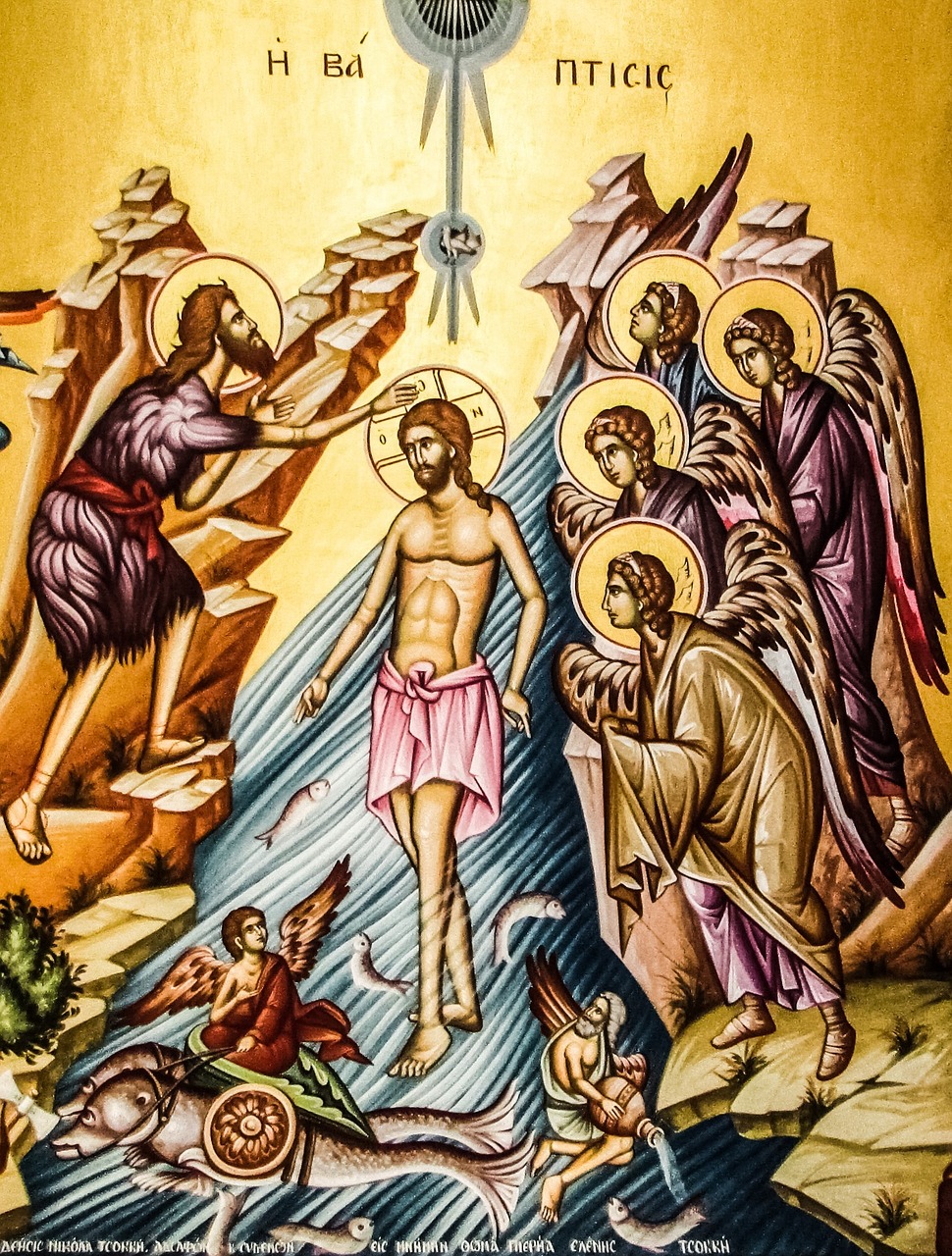 The wild-eyed, wilderness prophet is causing quite a stir.  John, the son of the priest Zechariah, is down at the Jordan River preparing the way for the Lord.  At John’s naming his father prophesied, Luke 1:76–79 (ESV) 76 And you, child, will be called the prophet of the Most High; for you will go before the Lord to prepare his ways, 77 to give knowledge of salvation to his people in the forgiveness of their sins, 78 because of the tender mercy of our God, whereby the sunrise shall visit us from on high 79 to give light to those who sit in darkness and in the shadow of death, to guide our feet into the way of peace.”

John urges everyone to “Repent, for the Kingdom of Heaven is at hand.”  The reign and rule of God is coming.  Turn from your sins now while there is still time because we are at the dawn of a new era where God is in charge.  Repent now because the Lord is coming to rule.

John is attracting a lot of interest.  People from all over are coming to repent of their sins and be baptized in the Jordan River to be washed clean of their iniquities.  The religious leaders come out to spy on John and see what is going on and John rebukes them.  People think John the baptizer is amazing.  People are flocking to hear him and respond to his call to repentance.  The people think John is great.

John is great and has a huge following, but as great as John is, he is just the prophet.  He is just the forward team getting things ready for the King of Creation to arrive.  John clearly tells the people.  Matthew 3:11 (ESV) 11 “I baptize you with water for repentance, but he who is coming after me is mightier than I, whose sandals I am not worthy to carry. He will baptize you with the Holy Spirit and fire.” John is a great prophet but he is not worthy to touch the shoes of the one who is to come.  And John proclaims that the coming one is coming in power and judgment. Matthew 3:10 (ESV) 10 Even now the axe is laid to the root of the trees. Every tree therefore that does not bear good fruit is cut down and thrown into the fire.  Matthew 3:12 (ESV) 12 His winnowing fork is in his hand, and he will clear his threshing floor and gather his wheat into the barn, but the chaff he will burn with unquenchable fire.”

This follows 700 year old prophecy from Isaiah 64:1–2 (ESV)  1 Oh that you would rend the heavens and come down, that the mountains might quake at your presence— 2 as when fire kindles brushwood and the fire causes water to boil— to make your name known to your adversaries, and that the nations might tremble at your presence!”

Repent! For the kingdom of heaven is near!  The almighty one is coming to rule in judgment with His ax and His winnowing fork.  John and the people are expecting a super hero figure to arrive.  They are expecting Superman.

And then Jesus arrives.  We learn from the Gospel of John that John the Baptist announces Jesus’ arrival, John 1:29 (ESV) 29 … “Behold, the Lamb of God, who takes away the sin of the world!”

But then Jesus tells John that He needs to be baptized by John.  Baptized by John?  What?  This is a baptism of repentance.  You are the chosen one, the Messiah, the Lamb of God taking away the sin of the world.  Matthew 3:14 (ESV) 14 John would have prevented him, saying, “I need to be baptized by you, and do you come to me?”

John knows that the dark world needs a savior.  The world needs someone to come and conquer evil, to put down so-called religious leaders who use and abuse others, to strike down corrupt kings who think only of their own comfort and pleasure.  The world needs a powerful savior to make the mountains quake and the nations tremble.  And here is Jesus of Nazareth who seems so normal.  He didn’t rend the heavens, He just came walking up.  And instead of taking charge He is submitting to John’s baptism. The pure and holy Lamb of God is going down into the waters in which all the people washed off the filth of their sins.

This week I spent time at the bedside of a 17 year old girl who graduated from our school.  She was found unconscious without a heartbeat early New Year’s Eve morning.  Paramedics got her heart started but she never regained consciousness.  I pleaded, “God, make her wake up!  Restore her! Bring her back to her family!”  But God did not.  Alacia was determined to have suffered brain death and arrangements were made to donate her organs.  God did not do what I wanted Him to do.

But God did do what He promised to do.  As a student, Alacia was baptized into the family of God and He promised to forgive her all her sins.  When Jesus went down into the Jordan River He picked up Alacia’s sins, and your sins, and my sins.  The holy, pure, sinless Lamb of God became the scapegoat corrupted by our sin.  2 Corinthians 5:21 (ESV) 21 For our sake he made him to be sin who knew no sin, so that in him we might become the righteousness of God.”  He carries those sins to the cross to be the sacrificial Lamb of God once for all.

There in the water Jesus looks like a normal guy getting baptized after walking down the road to the Jordan River.  John must be disappointed that Jesus did not rend the heavens and descend in power.  But just then…Matthew 3:16–17 (ESV) 16 … when Jesus was baptized, immediately he went up from the water, and behold, the heavens were opened to him, and he saw the Spirit of God descending like a dove and coming to rest on him; 17 and behold, a voice from heaven said, “This is my beloved Son, with whom I am well pleased.”

Even though it does not look like it, Jesus really is the Son of God come to save the world, but His ways are not our ways.  Jesus did not come to rid the world of sin and evil and sickness and death…not yet.  The people 2,000 years ago were frustrated by Jesus not meeting their expectations.  We are frustrated by Jesus not meeting our expectations.  Jesus does not come to you as some superhero forcing you to believe and behave.  Jesus may not do what you want Him to do, but Jesus continues to do what He has come to do, to forgive sins and give eternal life.  Jesus comes to you hidden in His means of grace. He pours out His grace in the waters of baptism, in His words of forgiveness and in His own Body and Blood in Holy Communion.

God’s ways are not our ways and yet we are told to continue to pray and so we continue to pray.  In the parable of the persistent widow Jesus teaches Luke 18:1 (ESV) 1 … to the effect that they ought always to pray and not lose heart.”  Jesus gives us the Lord’s Prayer and says, Matthew 6:7–9 (ESV) 7 “And when you pray, do not heap up empty phrases as the Gentiles do, for they think that they will be heard for their many words. 8 Do not be like them, for your Father knows what you need before you ask him. 9 Pray then like this: “Our Father in heaven, hallowed be your name.”

1 Peter 5:6–7 (ESV) 6 Humble yourselves, therefore, under the mighty hand of God so that at the proper time he may exalt you, 7 casting all your anxieties on him, because he cares for you.”

Cast all your anxieties on Him, because He cares for you.  On Monday night we got to see this in action when football players and coaches and fans at Paycor Stadium, and those watching on television throughout the country cast their anxieties on the Lord as they watched the medical distress of Damar Hamlin.  I suspect many who profess to be agnostic or atheists joined in praying for Damar.  There was nothing they could do but pray.  Even though they try mightily to reject His rule, in times of trouble people instinctively know there is a God and they cast their anxieties on Him.

You live in this time between Jesus’ ascension from the Mount of Olives and His return in power and glory.  You live now with Jesus’ promises of forgiveness of sins and eternal life looking forward to when Jesus will return with His ax and His winnowing fork to eliminate evil forever.  It is a time of now I am a baptized child of God in the Kingdom of Heaven, but the earth has not yet been recreated and the dead have not yet been raised; that day is still coming.

For now, living in this dark world, battling the forces of evil, you have the promises of God to strengthen and preserve you as you look to Jesus’ return in glory to destroy the darkness forever.  Come, Lord Jesus, come.  Amen.