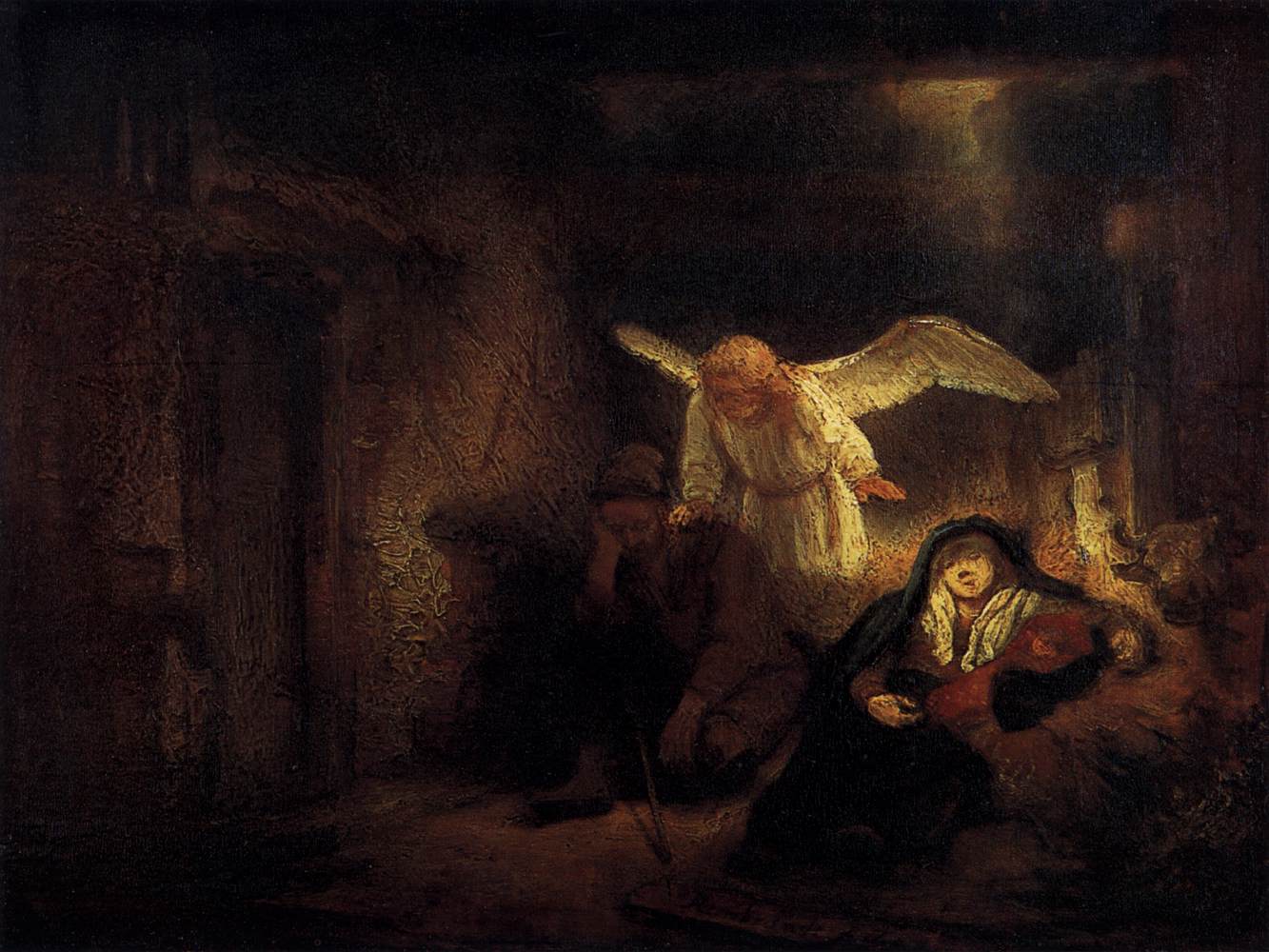 The summer between 8th and 9th grade I was riding my bicycle home from swim team practice on a bike path in Reston, Virginia.  Next thing I knew I woke up in the middle of Colt’s Neck Rd. staring up at a paramedic. I had been hit by a car and had a concussion, a badly broken leg and some serious road rash.  If only someone would have warned me that I need to stop and look both ways when crossing the street.  My summer took a dramatic turn in that moment.  I was blessed to have survived.

Life can change in a moment; a phone call, a text message, a tumble and fall, a doctor’s diagnosis, or a visit from an angel.

Joseph of Nazareth’s life is already in turmoil. His fiancée, Mary, is starting to show a baby bump and Joseph only knows one thing for sure, it isn’t his baby.  Joseph is torn up.  He is angry, confused, hurt, not sure how to respond.  But Joseph is a good guy.  He knows two wrongs don’t make a right and he still cares about Mary so he decides to quietly break things off so as not to bring additional shame on Mary. But before he does anything, Joseph decides to sleep on it and so he lays down -- depressed and brokenhearted.

While he sleeps, an angel of the Lord, a messenger from God, appears to Joseph in a dream.  The word “angel” in Greek means messenger.  God’s messenger has a message for Joseph.  Matthew 1:20–21 (ESV)  20 … “Joseph, son of David, do not fear to take Mary as your wife, for that which is conceived in her is from the Holy Spirit. 21 She will bear a son, and you shall call his name Jesus, for he will save his people from their sins.”

One short message and everything changes for Joseph. His plan to minimize Mary’s shame by divorcing her quietly is gone.  Instead of the gossips in town thinking that Mary was being unfaithful, they will assume that Joseph took advantage of poor Mary.  Joseph takes the shame that people would have heaped on Mary, and he puts it onto himself. This is what all husbands should do for their wives and it is a beautiful picture of what Jesus does for His bride, the Church.  Jesus takes all the shame and guilt of the sins of His people and puts it onto Himself … Ephesians 5:27 (ESV) 27 so that he might present the church to himself in splendor, without spot or wrinkle or any such thing, that she might be holy and without blemish.

The angel addresses Joseph as “son of David” even though, as far as Joseph is concerned, any glory of being descended from David is long past.  Joseph is just another unknown guy from a nowhere town trying to get by.  “Son of David;” what does this have to do with anything?  Now, those reading the Gospel of Matthew have just read the first 17 verses which are 42 generations of Jesus’ genealogy going from Abraham, Isaac and Jacob, down to … Matthew 1:16 (ESV) 16 … Jacob the father of Joseph the husband of Mary, of whom Jesus was born, who is called Christ.”  Jesus will be adopted into the royal line of David through His step-father, Joseph.  Those reading the Gospel know this, but this is all news to Joseph.

The first sentence of God’s message to Joseph is almost incomprehensible. The baby inside of Mary is from… the Holy Spirit.  Wait….what??? What does that even mean?  How does that work?  It does not make sense, but it must be true because God is saying it is true.  The first sentence changes Joseph’s life.  The next sentence is even more powerful.

Matthew 1:21 (ESV)  21 She will bear a son, and you shall call his name Jesus, for he will save his people from their sins.”  This is not just a miraculous pregnancy.  This baby is no ordinary baby.  He will save His people from their sins.  Who can save people from their sins?  No one can do that.  No one …except …except, God Himself.  And this baby is to be called Jesus.  Ihsous.  That is the Greek form of the Hebrew name Yeshua.  Joshua in English.  Yeshua means Yahweh is salvation.  Yahweh saves. Yahweh is God’s name that He told to Moses out of the burning bush.  The baby’s name means Yahweh is salvation, and the angel says that the baby will save His people from their sins.  How can this be true?  Joseph’s head must be spinning.  How can this be happening to me?  How is this possible?  Mary is pregnant with Yahweh who will save?  Mary has the long-promised Messiah growing in her womb?  How can this be?  How can the infinite God be contained in the finite body of a tiny, unborn baby?  So many questions brought by the angel’s message from God.  So many questions.

Matthew 1:24–25 (ESV)  24 When Joseph woke from sleep, he did as the angel of the Lord commanded him: he took his wife, 25 but knew her not until she had given birth to a son. And he called his name Jesus.”  Joseph did as he was told to do even though this turned his life upside down.  Joseph does not know what will happen next.  He does not know all the implications.  He does not have all the answers.  He just does what he is told to do.

Joseph here is a great example for us.  Joseph does not question the angel’s message in His dream.  He does not dismiss it as the result of spicy food before bedtime.  He does not demand answers.  He does not try to explain it away or make excuses.  He does what he is told to do.  He follows orders.  It almost sounds wrong to us.  We have been told to question authority.  To not just blindly follow orders.  To our ears it almost sounds like Joseph is being weak for just following instructions because in our sinful nature we are naturally rebellious.  We rebel against parents.  We rebel against teachers.  We rebel against coaches, against bosses, against the government.  Someone tells you what to do you and you think, “I know better. I have a better way.”  In this world, obedience is viewed as weakness, and we applaud those who resist authority.

Joseph does what he is told to do even though it will make his life difficult.  Having Christ in his life does not make Joseph’s life easier by doing the right thing. Christ complicates life.  Christ brings with Him His cross, and your cross.  It would be easier for Joseph to roll over in bed and ignore each of the angel’s messages, but that is not God’s way.  Joseph does things God’s way.  God’s way is not the easy way, but it is the right way, and while it does not protect you from trouble and attacks from the world, it will keep Jesus as your king.  God’s way keeps you on the path to eternal life.

The angel’s short, two sentence message changes Joseph’s life.  He goes from being an unknown descendent of King David to being step-father to the King of the Jews.  Joseph’s adopted son is the King of all creation, the Christ, the Savior of the world, Yeshua, Yahweh saves.

You have Christ in your life.  You are a redeemed child of God with God’s name watered onto you in Holy Baptism. You are a Christian.  Being a Christian means living under the cross.  This will bring difficulties.  How should you live?  Do what God tells you to do because He is God and you are not.  Love God, love your neighbor.  Love your enemy. Pray for those who persecute you.  Do not conform to the world but be transformed by the renewal of your mind.  Gather together each Lord’s day to confess your sins and receive forgiveness.  Keep intimacy inside the bonds of marriage.  Turn the other cheek.  Don’t get angry at people.  Do not lust after people.  Pray.  Give generously and quietly.  Forgive each other.  Care for each other.  Serve God, not money.  Do not be anxious.  Do not judge others.  Speak the truth, in love.  Confess your sins.  Repent, for the kingdom of heaven is at hand.  Do what God tells you to do, because you belong to God.

The angel’s short, two sentence message changes Joseph’s life.  He goes from being an unknown descendent of King David to being step-father to the King of the Jews.  Joseph’s adopted son is the King of all creation, the Christ, the Savior of the world, Yeshua, Yahweh saves.

Joseph will receive three more messages from God through an angel appearing to him in dreams.  He is instructed to flee to Egypt before Herod the Great kills all the baby boys in Bethlehem and then, after Herod’s death, Joseph is told to return to Israel and once there he is told to go to Nazareth to avoid Herod’s son Archelaus.

Joseph receives the messages from God and immediately does what God tells him to do.  No words of Joseph are recorded in the Bible; he gave no speeches, no pithy, fatherly advice.  He is our example of quiet, humble obedience to God.  Joseph does what he is told, and protects and provides for Mary and young Jesus. Joseph saves Jesus who saves you and me and all who believe in Him.

Life can change in a moment but God’s promises do not change.  Through all of the turmoil and trouble you remain in Christ and Christ in you.  You are an adopted child of God.  Yeshua, Yahweh Saves, saved you.  Amen.