Missing the truth standing in front of you 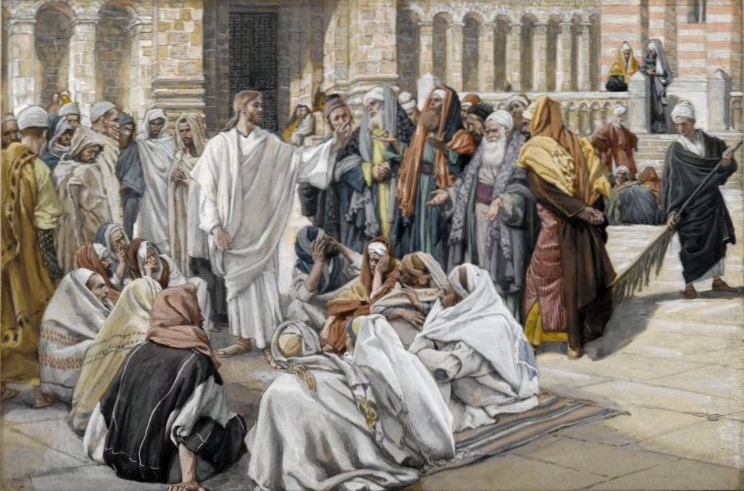 Recently there was a viral video going around on social media of a teenage boy excitedly opening the envelope containing his first paycheck.  The excitement turns to frustration and anger when he sees what is left after taxes.  His older brother helpfully tells him, “Welcome to the world.”  I haven’t met too many folks that like taxes.

Now, taxes are necessary.  And in this nation taxes are sort of our own fault since we tax ourselves by voting for levies and voting for the people who write and administer the tax code.  We really don’t have anyone to blame but ourselves.

The people in Jesus’ time do not get to vote. Taxes are imposed on them by the Roman Empire and the local authorities.  The people have no say; they pay what Caesar tells them to pay, and probably more due to dishonest tax collectors.  There is a deep, ongoing tension between the Jewish people and their Roman overlords who enforce the laws through local, so-called Jewish kings and Roman governors.

In our Gospel reading today it is shortly after Jesus’ triumphantly entered Jerusalem to the shouts of the crowd and cleared the Temple.  The Pharisees are working hard to nail Jesus down with His own words so that He will be caught up in the political abyss between the Jewish people and the Roman authorities and be discredited.  The Pharisees recruit their political enemies the Herodians who were in favor of the Romans to help trap Jesus in His words.  Such much political intrigue.  So much tension.  So much trying to get Jesus to condemn Himself.  The Pharisees have crafted a carefully prepared trap.  Matthew 22:17 (ESV) 17 Tell us, then, what you think. Is it lawful to pay taxes to Caesar, or not?”[1]

Over the years a lot of words have been spoken and a lot of ink has been spilled discussing what Jesus meant by “render to Caesar the things that are Caesar’s.”  We hear that Jesus is teaching that we should pay taxes to the government as if this is the main point of Matthew’s account of this confrontation.

Oh, those wily Pharisees, they’ve got Jesus right where they want Him. They are going to nail Him down on this question and that will be the end of Jesus.  But Jesus knows what they are doing.  Matthew 22:18 (ESV) 18 … “Why put me to the test, you hypocrites?[2]

The Pharisees are hypocrites because they themselves wouldn’t answer that same question out of fear of angering the Jewish people or the Roman authorities.  Jesus quickly dismantles their argument by having them show him a coin with Caesar’s picture on it.  Matthew 22:21 (ESV) 21 … “Therefore render to Caesar the things that are Caesar’s, and to God the things that are God’s.”[3]

Over the years a lot of words have been spoken and a lot of ink has been spilled discussing what Jesus meant by “render to Caesar the things that are Caesar’s.”  We hear that Jesus is teaching that we should pay taxes to the government as if this is the main point of Matthew’s account of this confrontation.

Now, this does not mean that you should give away everything you own and run off to a monastery.  It does mean that you should live your life doing what you are supposed to be doing; loving God, and loving and serving your neighbor in whatever vocations that you have; parent, child, grandparent, employer, employee, student, teacher, citizen, pastor, parishioner, neighbor.  It means cutting out sinful behaviors from your life no matter how much it hurts.  It means using your money to serve and love those you have been given to serve and love, and finding ways to love and serve others.  It means that you do not get a partition off a part your life or your money that you can use for selfish indulgence and evil.  Everything belongs to God.

These idiot Pharisees are all worried protecting their political power and influence; they are so worried about making money from the Jewish people; they are so worried about the day to day political intricacies of life.  They are even using their enemies, the Herodians, to try to pull Jesus into a dispute about taxes, but they are missing the infinite, divine truth standing right there in front of them.  Jesus is the Messiah, the Christ.  God, the King of the universe is standing right in front of them and they are missing it because they are so busy with their own stuff. They hear but do not understand. They see but do not perceive.  The Pharisees are so caught up in the politics that they miss out on Jesus’ identity.

How many people today are like those idiot Pharisees missing the giant truth that Jesus is God?  In all the craziness of the world it is so easy to let the worries of day to day life blind you to the truth of Jesus.  Like the Pharisees so many do not understand who Jesus is but instead just want to manipulate Jesus in order to make Him say what they want.  So many reject the truth that Jesus is King.

With the current 24 hour news cycle and ever present social media it is tempting to get so caught up in politics that you can start to believe that politicians are your savior.  This is especially true during the election season. Now, if you are a citizen you have a duty to stay informed and to vote, and as a Christian your duty is to vote in a way that loves and serves your neighbor.  You vote in a way that protects the vulnerable and weak.  You vote in a way that protects innocent life from those who would snuff it out.  You vote for taxes that are good for your neighbor.  Elections are important, but not eternally important. No matter who wins an election God is still God.  Jesus is still King and that is infinitely more important than who has temporary political power.

Jesus has come to Jerusalem and is confronting the Pharisees and they are fighting back and are trying to nail Jesus down on a question of taxes but Jesus does not allow it.  Jesus does allow Himself to be nailed down on Friday morning.  The Jewish and Roman authorities team up to arrest Jesus. Beat Him.  Mock Him.  Flog Him. Crown Him with thorns and parade Him through the streets to the place of the skull where they nail Jesus down to a cross and lift Him up to suffer and slowly die in utter humiliation.  Jesus allows Himself to be the sacrifice for sin; your sin, my sin, the sin of the whole world.  Wearing a crown, Jesus allows Himself to be crucified to redeem you under a sign that announces to all that He is the King of the Jews.  Three days later He victoriously rises from the dead to conquer sin, death and hell forever.

Jesus is King.  Jesus reigns; He rules.  Your whole being and everything you have belongs to Jesus.  Render to God the things that are God’s.  Amen.