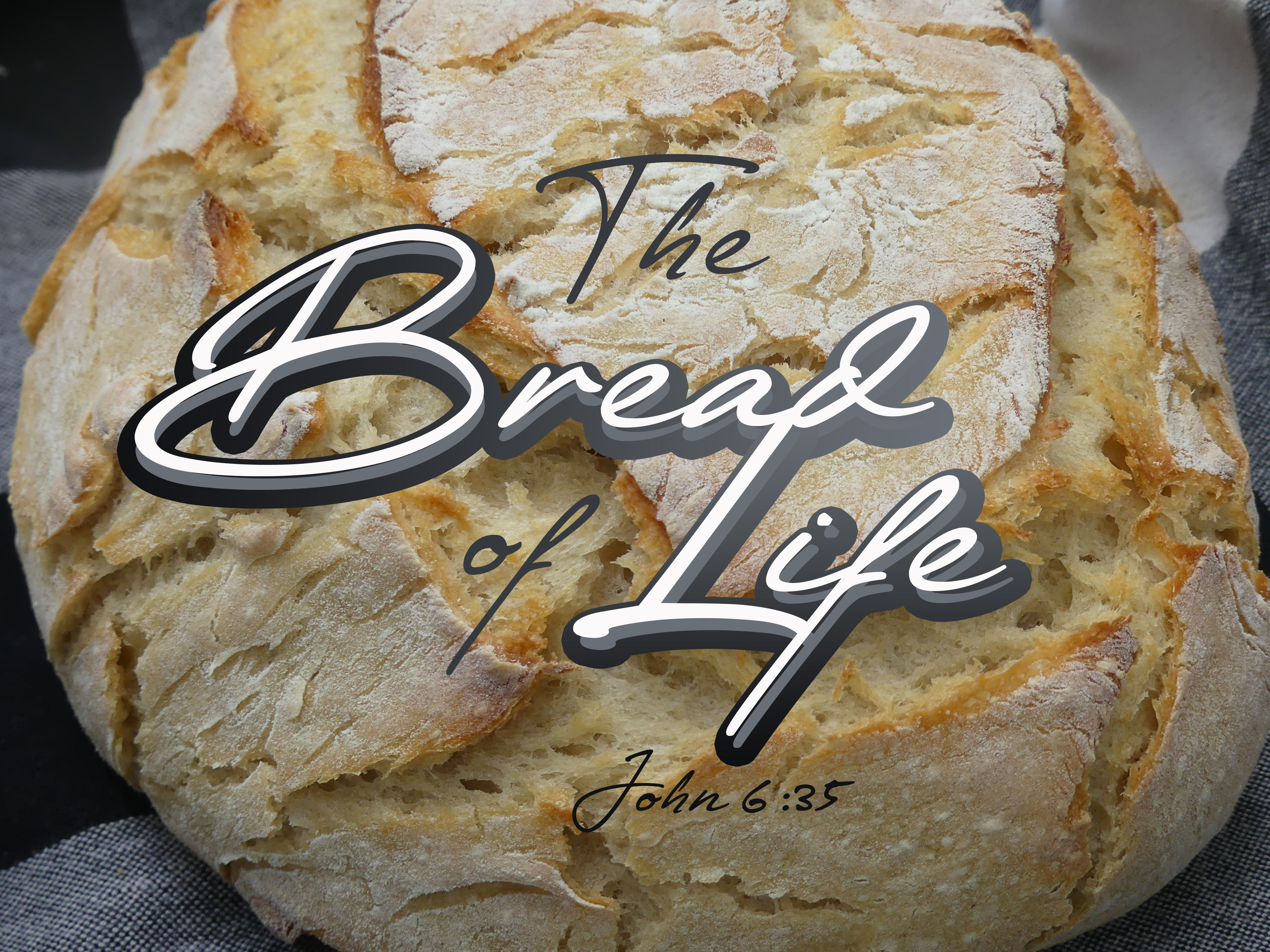 Grace, mercy and peace be to you from the Father and the Son and the Holy Spirit. Amen

The text for today’s message is as recorded in the Gospel Lesson from the 6th chapter of St. John.

22 On the next day the crowd that remained on the other side of the sea saw that there had been only one boat there, and that Jesus had not entered the boat with his disciples, but that his disciples had gone away alone. 23 Other boats from Tiberias came near the place where they had eaten the bread after the Lord had given thanks. 24 So when the crowd saw that Jesus was not there, nor his disciples, they themselves got into the boats and went to Capernaum, seeking Jesus. 25 When they found him on the other side of the sea, they said to him, “Rabbi, when did you come here?” 26 Jesus answered them, “Truly, truly, I say to you, you are seeking me, not because you saw signs, but because you ate your fill of the loaves. 27 Do not work for the food that perishes, but for the food that endures to eternal life, which the Son of Man will give to you. For on him God the Father has set his seal.” 28 Then they said to him, “What must we do, to be doing the works of God?” 29 Jesus answered them, “This is the work of God, that you believe in him whom he has sent.” 30 So they said to him, “Then what sign do you do, that we may see and believe you? What work do you perform? 31 Our fathers ate the manna in the wilderness; as it is written, ‘He gave them bread from heaven to eat.’ ” 32 Jesus then said to them, “Truly, truly, I say to you, it was not Moses who gave you the bread from heaven, but my Father gives you the true bread from heaven. 33 For the bread of God is he who comes down from heaven and gives life to the world.” 34 They said to him, “Sir, give us this bread always.” 35 Jesus said to them, “I am the bread of life; whoever comes to me shall not hunger, and whoever believes in me shall never thirst.

SO FAR THE TEXT

In Gospel lesson we continue hearing of Christ and His disciples, moving from St. Mark’s record to this continuation as recorded by St. John.  The 5000 people Jesus had fed now have moved to their boats or began to run around the lake to gather around Him.  The people wanted to see more miracles, to be healed, to bring family members to be healed.  Yet there was more teaching to be done, not just food for today, not just healing for today, but more than that the revelation of who Jesus Christ was and is. Even though these people thought they were following Him because they saw great signs, Jesus taught them that they were really following Him because of the promise in the sign.  His promise, the promise of everlasting life.

This crowd had witnessed His signs, heard of other miracles and signs, but they were not getting the true message.  This day Jesus tells the people why they are in His presence. In this scripture, the crowd had seen the signs, but they missed the promise.   They had ate their fill of earthly bread and they had been amazed, so much so that some had jumped in boats and others had run around a lake to see and hear Jesus speak again.  But Jesus tells them that their desire to be with Him was not because they had seen the signs, but because they had all eaten their fill of bread.  And the bread about which Jesus spoke was not the bread that was multiplied and found in the baskets, it was the bread of life given to them from their Father in heaven, it was Jesus himself who was in their midst that was their promise.  Yes the not only the crowd but the disciples too had missed the nuance of the gathering of even the crumbs after everyone was fed.

Jesus said, “you are seeking me, not because you saw signs, but because you ate your fill of the loaves… Do not work for the food that perishes, but for the food that endures.”  The words Jesus used sounded strange to this crowd, “Food that does not perish?”  This struggle with understanding is explained in the words of St. Paul; “they were the walking with futility in their minds.  They were walking in a darkened understanding and they were alienated from the life of God because of the ignorance that was in them, due to their hardness of their heart.”

These people gathered around Jesus were the ancestors of the Israelites of those who had been delivered by God from slavery to the Egyptians.  They knew that their.  These were people whose forefathers had traveled in the wilderness for 40 years and were sustained by manna from heaven, as fine as frost on the ground.  But that manna did not keep, it would spoil at the end of the day.

And lest this crowd think that they need work for the food Jesus continues, “but for the food that endures to eternal life, which the Son of Man will give to you. For on him God the Father has set his seal.”

Now in front of the crowd stood the Son of Man, the Messiah, Jesus the Christ, the one upon whom God the Father had set His seal. And this gift, whom God had promised, offered them the food of eternal life.  But, they still did not see the promise, they asked instead a question that is still being asked today; “What must we do, to be doing the works of God.”  Jesus quickly teaches and corrects them in a gentle way, and says; “This is the work of God, that you believe in Him whom he has sent.”  It is God’s work, not the work of man and Jesus was telling them again that He was the promise, and that they were to believe in Him.

Yet the poor crowds are still thinking of their stomachs when they respond, “Sir, give us this bread always.” (John 6:34) Martin Luther preached about these people and said, “This announcement that the Gospel would fill their bellies, that it would provide plentifully for this life and afford a good living, pleases them. They say, as it were: “This would be the man for us. Who would not like him?” We, too, would like such a preacher. They pay no attention to Christ’s words to learn where He wants to lead them, but they are happy over the prospect that He will fill their bellies and give them only earthly goods and money. But that is not the point. The Gospel does not fill the belly; it has something different to do. Times have not changed. When the Gospel is preached, everyone is eager to reap a sufficient store of earthly goods from it.” (Luther’s Works, Vol. 23: Sermons on the Gospel of St. John)

Luther’s words ring true for our time as well.  We’d rather hear a sermon with no Law, no reminder of our sin, tell me about how to make bread in this life.  ….

God, in His infinite knowledge and perfect wisdom, will give us, not what we want, but exactly what He knows we need … both here in time and forever in eternity.

And we still see that promise, that eternal miracle of the one who was sent for US to be OUR manna from heaven, the one who still fills us with His life even today.  A promise that was fulfilled when Jesus paid for our sins upon a cross.  That promise is fulfilled when Holy Spirit was poured out upon us in saving waters of our Baptism.  The promise is fulfilled when we hear His Word and in the sacrament in His body and blood.  A promise freely given to us by the grace of God.  A promise that tells us God has provided for us for all time.  We are filled with the Bread of life, not by work, want, earthly desires, or our own reason and strength, but rather by God’s giving us His Son Jesus Christ to die for our sins on the cross.  On Jesus, “God the Father has set his seal.” In our baptism we are sealed by the water combined with God’s Word, sealed as one redeemed by Christ the crucified.  In the Holy supper of our Lord, we are given the Bread of Life, Christ’s body, and His blood to eat and drink for the forgiveness our sins.  It is by Christ who gives us the power to believe, and in Him we shall never hunger.  God gave us His Son, Jesus Christ, the bread that sustains us so that we see His sign and promise, of life everlasting in His name.

In the Name of the Father and of the Son and of the Holy Spirit.  Amen